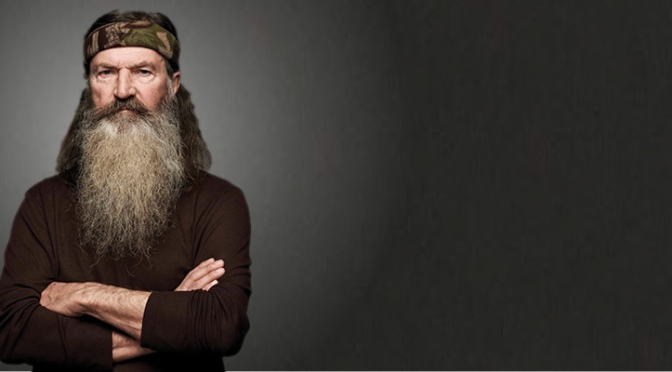 The news of Phil Robertson’s suspension is all over the internet.  The twitterverse is abuzz.  Lost in many of the stories and tweets is the full text of his relevant comments to GQ, so let’s start with those:

[asked about what, in his mind, is sinful:] “Start with homosexual behavior and just morph out from there. Bestiality, sleeping around with this woman and that woman and that woman and those men,” he says. Then he paraphrases Corinthians: “Don’t be deceived. Neither the adulterers, the idolaters, the male prostitutes, the homosexual offenders, the greedy, the drunkards, the slanderers, the swindlers—they won’t inherit the kingdom of God. Don’t deceive yourself. It’s not right.”
. . .
“We never, ever judge someone on who’s going to heaven, hell. That’s the Almighty’s job. We just love ’em, give ’em the good news about Jesus—whether they’re homosexuals, drunks, terrorists. We let God sort ’em out later, you see what I’m saying?”
. . .
“You put in your article that the Robertson family really believes strongly that if the human race loved each other and they loved God, we would just be better off. We ought to just be repentant, turn to God, and let’s get on with it, and everything will turn around.”

The comments by Phil Robertson are not—or should not be—particularly surprising, considering that he is a Christian and a self-proclaimed “bible thumper,” who does not shy away from the fact that he believes the Bible is God’s word and is inherent. Much of what he said is taken nearly verbatim from the Bible (see, e.g., 1 Corinthians 6:9-10).    As others have already noted, the Koran contains similar proclamations regarding homosexuality, the Pope ascribes to the Bible’s views on sin, and countless prominent religious leaders have espoused similar views in recent years.

The current issue of TIME magazine features Pope Francis I as “Person of the Year.” Within days of TIME’s declaration, Phil Robertson had been suspended from Duck Dynasty. Robertson’s suspension was caused by his statements that homosexual acts are sinful. But Pope Francis is riding a wave of glowing publicity, even as he has stated in public his agreement with all that the Roman Catholic Church teaches, including its teachings on homosexual acts. — Albert Mohler (@albertmohler) December 19, 2013

[On homosexuality and his belief that marriage is between one man and one woman:] I fear the disapproval of God more than I fear your disapproval. — Rick Warren (@rickwarren) December 9, 2013

So why is Phil Robertson being censored and decried as hateful?

Perhaps because it is easier to express indignation at the words of one man, and to condemn him, rather than to condemn the God whose words he quoted.  Perhaps because when similar sentiments are uttered by the Pope or an evangelical leader, they can be dismissed as those by an “employee” of the Almighty, who is simply touting the company line.

Regardless of the reasons, it can hardly be debated that if a prominent liberal figure in the entertainment industry made similar comments regarding religion, mainstream media would generally defend on his rights to express his opinion.  Consider Bill Maher, darling for the left, who has given us comments like “I think religion is a neurological disorder,” or “I think religion stops people from thinking. I think it justified crazies.” Yet Bill Maher is praised as a satirist, entertainer, and political commentator, while Phil Robertson is guilty of “push[ing] vile and extreme stereotypes” and, apparently, is too dangerous to be on television.

3 thoughts on “Duck Dynasty Star Shot Down By A&E”