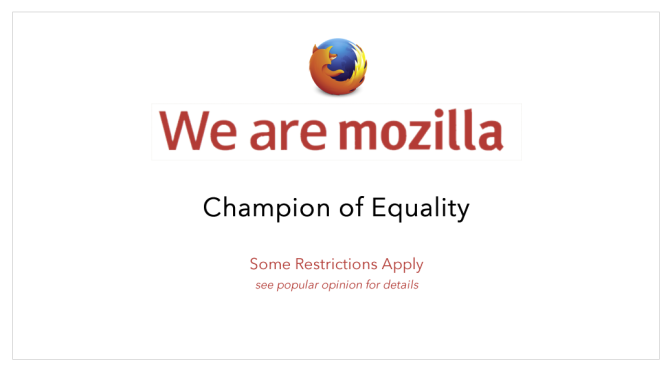 Mozilla co-founder Brendan Eich–the guy who created JavaScript–resigned yesterday as CEO from the Mozilla Corporation and from the board of the nonprofit foundation that wholly owns the company.

Here are some of the reasons he did not resign:

Incidentally, the various company founders and/or CEOs who did the things described above retained their positions.

Here is the reason Eich did resign: In 2008, he gave $1,000 to a non-profit group.  Yep, that’s it.  Of course, here’s the kicker–the group is ProtectMarriage.com, and they were behind the Prop 8 campaign in California.

Quick background: Prop 8 (a constitutional amendment) defined marriage as the union of one man and one woman.  This amendment to the California Constitution passed in 2008 when more than 7 million California residents voted for it.  Incidentally, this took place just eight years after 61% of California voters passed Prop 22 (a state law), which basically said the same thing.  Prop 22 was struck down by the California Supreme Court in 2008, by a narrow 4-3 decision, which led to Prop 8.

Regardless of whether you agree or disagree with Eich’s position, you should be–at a minimum–extremely concerned by the internal and external pressure that forced him to resign.  Not because it violated the First Amendment, because it didn’t: the First Amendment constrains government action, not the decisions of a private company.  You should be concerned because it is a glaring example of society’s increasing willingness to embrace a nebulous concept of “tolerance” over established and foundational values like freedom of expression, [true] diversity, and equality.  And, more to the point of this post, because it is a shocking example of hypocrisy.

Below are portions of the statement from Mozilla on Eich’s resignation, accompanied by my commentary.
(Disclaimer:  The statements and views expressed in this posting are my own and do not reflect those of my employer, are intended for general informational purposes only, and do not constitute legal advice or a legal opinion. Read my full disclaimer here.)

Mozilla believes both in equality and freedom of speech.

While–as mentioned above–Mozilla is not bound by the First Amendment, they affirmatively endorse it here.  With that in mind, perhaps they should have focused on the fact that the protections of the First Amendment exist not to protect popular speech (the kind that Mozilla approves of), but to protect unpopular speech.  Indeed, the U.S. Supreme Court has held that “[i]f there is a bedrock principle underlying the First Amendment, it is that the government may not prohibit the expression of an idea simply because society finds the idea itself offensive or disagreeable.” Texas v. Johnson, 491 U.S. 397, 414 (1989) (emphasis added).

Equality is necessary for meaningful speech.

I wish they defined what they meant by equality because, as best I can tell, the only “equality” necessary for free speech is the equal opportunity for people with diverging viewpoints to express those viewpoints.

And you need free speech to fight for equality. Figuring out how to stand for both at the same time can be hard.

Perhaps the reason it is hard is because Mozilla appears to be limiting the purpose of free speech to the fight for its murky definition of equality, rather than the freedom to express ideas, even if those ideas are unpopular.

Our organizational culture reflects diversity and inclusiveness. We welcome contributions from everyone regardless of age, culture, ethnicity, gender, gender-identity, language, race, sexual orientation, geographical location and religious views. Mozilla supports equality for all.

Unless of course, your “contribution” is made to a non-profit defending a tradition of marriage that, as recently as 2008 (when Eich made his donation), was supported by the likes of President Obama, Senator Clinton…oh, and about 7 million California residents (all of whom are probably now ineligible for Mozilla’s top post).  If you fall into that category, even if your beliefs were motivated by your culture, geographical location, or religious views, your contributions are unwelcome.

We have employees with a wide diversity of views.

Our culture of openness extends to encouraging staff and community to share their beliefs and opinions in public.

I have to assume that staff are now going to think twice about what beliefs and opinions they share in public.

While painful, the events of the last week show exactly why we need the web. So all of us can engage freely in the tough conversations we need to make the world better.

Again, it seems that “engag[ing] freely” in “tough conversations” is only advisable if one is going to share thoughts and beliefs that are pre-approved by this so-called tolerant company.  The irony here is that Eich wasn’t running around proclaiming his support for Prop 8.  He was outed.

Thank you for sticking with us.

Sorry Mozilla, but after your shameful actions, that’s the last thing I’m going to do.