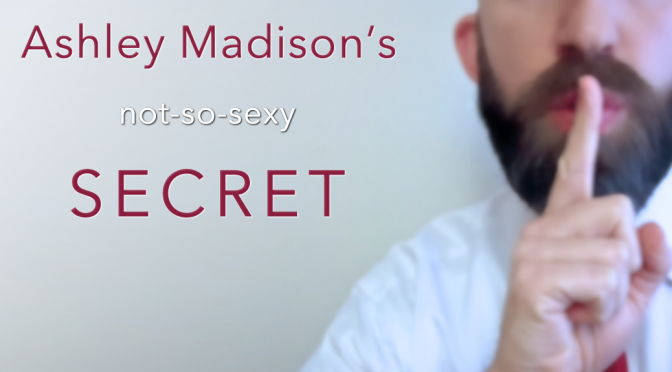 Noel Biderman really wants you to have an affair.  So much so that he has made illicit passion his life’s passion.

Lest you think Noel is just a benevolent benefactor, tirelessly working to help bring infidelity to your doorstop,  I should point out that Noel is financially incentivized to encourage you to cheat on your spouse. More specifically, Noel makes money if you choose (1) to break your marriage vows, and (2) to utilize his company–Ashley Madison–to do so.  It turns out that adultery can be a very profitable business, if you are willing to embrace the shame of peddling sex. Noel freely admits he is “printing money,” a perk of operating a “taboo-focused business.”   “Taboo focused” just means that, before Noel, no one else was willing to cast aside conscience in favor of cash, at least, not via this particular venture.  Incidentally, can you imagine how his job goes over at “Career Day” at his kids’ school?

Before we explore Noel’s hypocrisy, let’s take a look at the lies that his website proclaims about extramarital affairs  (just going to the website made me want to take a shower to wash the filth off, so I’m not inclined to provide a link to it):

(emphasis added).  Just a few observations regarding the claims on this website:

Aside from the obvious lie that Noel Biderman is selling, it is significant to note that Noel claims that he has not indulged in his own product.  Why?  Because he’s a married father of two children with a “happy” marriage, and because  his wife would be “devastated” if he did.   Let that sink in.  Even though Noel claims an affair can actually “save” a marriage, he isn’t willing to put his marriage where his money is.

Noel is the equivalent of a car salesman at a Toyota dealership, who personally refuses to drive anything other than a Honda but tries desperately to convince you that a Toyota is right for you.  He’s like a drug dealer saying his product is the purest of the pure and will bring a clarity or an intense pleasure that you’ve never before experienced . . . but neither has he.

If Noel is to be believed, he has never so much as tried his own product.  But he wants you to bet your marriage on his product.  It’s a risk he isn’t willing to take, and neither should you.